Hello friends one piece luffy here and today we gonna talk about the fight between luffy and Kaidou, after a very long time the fight between luffy and katakuri we gonna see some real fight of Luffy with Kaidou the strongest creature on earth .
In the chapter 923 we get to see Kaidou dragon form and his true original form and we see that Luffy attacked him with his gum gum elephant gattling when he was drunkard and in his dragon form and Luffy punched turned him back into his human like form cause definitely Kaidou not a human he is a devil.

Then with Kaidou single thunder blade attack Luffy was on the ground and losses his consciousness… Can u believe it with just one attack of Kaidou luffy was K.O. but oda is not gonna end it this way maybe in chapter 924 we get to see some new power of Luffy which he always kept hidden till now. 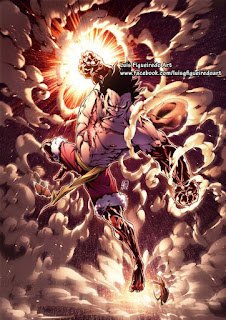 Now let think about it so up until now Luffy still hasn’t fought with big mom and he only fought katakuri who is a commander of big mom one fleet and katakuri power is nowhere near big mom and Kaidou and big mom both are devils in human form and for Luffy his fight with katakuri was not an easy one so a big question is how is Luffy gonna defeat Kaidou in the wano arc even with the help of Trafalgar law and his whole crew Kaidou power is not to be neglected .

So one and for all this chapter gonna be an action packed thriller .

one piece is a shown manga written by eiichiro oda and its on its path to It’s 1000 chapter with more than 300million copies sold worldwide .one piece is a story about luffy who wanna the king of pirates and conquer the treasure named as “one piece” with his crew mates nami ,sabhi ,zoro,usopp ,Nico robin and all the friends he make in his way to conquer the grandline and all the fans heart.

6 thoughts on “Kaidou vs Luffy | Who Is Gonna Win”